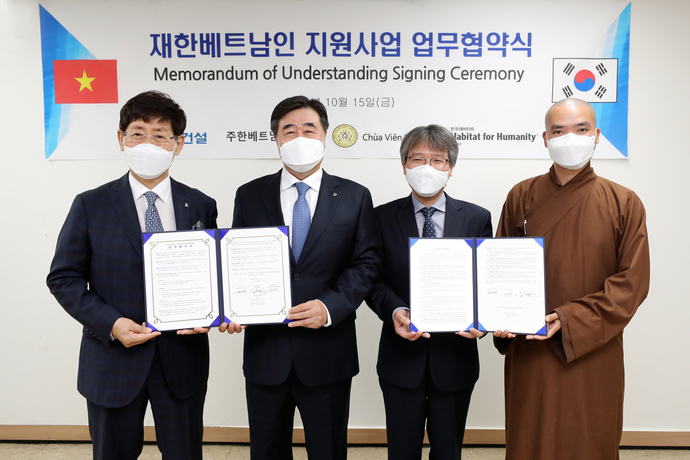 Daewoo E&C plans to support the entire project cost of 250 million won to create murals and build shelters, and conduct volunteer activities to build houses with love for employees. The site for the construction of the shelter is provided by Wonosa, a Vietnamese Buddhist located in Cheonan, Chungcheongnam-do, and Habitat Korea is in charge of promoting the project.

The mural is scheduled to be completed by the end of this year under the theme of a pattern symbolizing the tradition and harmony between the two countries on the inner and outer walls of the Vietnamese Embassy in Seoul, which is under construction in Jongno-gu. The shelter will be operated by Wonohsa, and will provide housing support and other treatment and counseling to Vietnamese residents in Korea.

Since 2001, Daewoo E&C has been carrying out facility repair work for families suffering from aging through the ‘Repair the House of Hope’ campaign, taking advantage of the characteristics of the construction industry. Since 2018, it has expanded its scale by collaborating with Habitat Korea, and has been carrying out various social contribution activities, such as a project to improve the living environment of descendants of independent meritorious people.

Daewoo E&C President Kim Hyung said, “This agreement is even more special as it is being promoted to mark the 30th anniversary of diplomatic ties between Korea and Vietnam in 2022. I hope it will be a resting place in life.”

Meanwhile, Daewoo E&C entered the Vietnamese construction market in earnest with the establishment of a branch in Hanoi, Vietnam in 1991, and carried out projects worth about $3 billion over the past 30 years. Currently, the 'Star Lake City' project is being promoted to create a new town of 2,104,281 square meters, which is two-thirds the size of Yeouido, in the West Lake area located in the northwest of Hanoi's old city center.